“Out of The Shadows”

“At its best Out of The Shadows is alternative Goth rock with folk leanings. A collection of very different songs rather than an album where a band is seeking to define a musical identity, but Into The Unknown certainly have a way about them.” – Ramzine.co.uk

“Into The Unknown have a produced a solid debut album, there are some good musical moments on here and they have laid the basis for a good crack at the rocky road to success in rock ‘n’ roll. “ – Get Ready To Rock

“Each track is different though the band’s unique sound echoes through all of them. There are catchy riffs, hard rocking songs, great covers and some very memorable moments. They have produced an excellent debut which should appeal to a wide audience; take a listen to “Breaking My Heart” by clicking the link and judge for yourself” – Annular Media

““Breaking The Silence” is the second album of this English band. It is a record that has a diverse style, flies around here and now again and this variety makes it interesting…. cool music that will entertain you, and you don’t have to think about it.” – Rock Hard Slovakia (translated)

“The album is a mixture of styles and to me, if I closed my eyes I could almost imaging this to be a musical score written for a theatrical musical with all its twists and turns in different directions … fans of musicals and musical interludes and changes will probably love this album for its originality” – kposer.com

“Breaking the Silence is a decent effort for Into the Unknown – and those who love symphonic rock with 80’s alternative nuances will dig most of these songs.” – Deadrhetoric.com

“The second album, “Breaking The Silence”, is said to be an evolution from their previous album, and moves further into symphonic rock. Not that I would call what they are doing symphonic rock, because there’s much more than that here.” – Hard Rock Info

“There were a couple of tracks that were more of power ballads that were truly great. Into the Unknown really have something here and I really want more of it.” – Uber Rock

“A plus point of the disc is immediately apparent, namely the powerful production by bassist and keyman Rupert Withers, which has got an incredibly direct sound. When the music starts, you want to look around to see if a band is playing in the room….”Breaking The Silence” is a crafted well-made disc” – Powermetal.de (translated from German)

“For me, the highlight of the disc is the rocky cover version of the HOWARD JONES 80s classic “WHAT IS LOVE” with orchestral arrangements” – InHard (Translated from German) 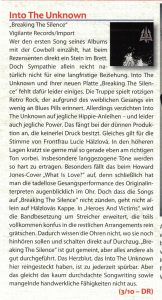 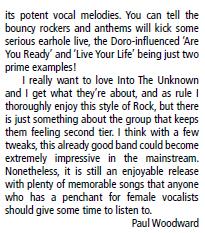